Why Web Browser Compatibility is Important to Us

Simply put – we want you and your website visitors to experience your website, as it was designed to be experienced. It should look and function the same, regardless of the device or browser that is being used to view it.  A visitor that arrives at your website that gets a less an optimum experience is very likely to leave and we don’t want that happening. We want to maximise traffic and time on site so that your business benefits from a happy visitor, not scare them away or have them leave in frustration.

Testing and quality control form an integral part of our design and development lifecycle and we pride ourselves on how robust our process is and how it differentiates us from other web development companies. Our goal is to deliver a quality website that you can depend upon. We adhere to the latest web standards to ensure that your website will work on a variety of browsers and devices now and in the future when new technologies are released. Before any or our websites are launched, they are rigorously tested using best practice testing tools and procedures. Over the years we have refined our quality control process to ensure consistent results and performance.

Along with full testing by the Developer and independent testing by our Lead Developer through the development phase, an independent QA Controller also conducts a meticulous 50 point testing and review process at the completion of the website development phase and immediately prior to launch. This includes exhaustive testing for cross browser consistency, cross device testing, page speed testing, HTML and CSS validation, as well as a full functionality and layout check.

Our rule of thumb for browser testing, to ensure your website displays correctly across all, is ‘current version minus one’ but in practice we still carry out testing on very old versions of Internet Explorer (IE) - right back to IE9 in fact. Microsoft’s most current browser is Microsoft Edge which was released this year with Windows 10 - so we are actually testing ‘current minus four’ in IE! "Why?" You may well ask. Well, each time a new operating system (OS) is released by Microsoft, a new browser comes as default with that OS. Each OS has a certain market share and so we consider that when deciding if we will still support a particular version of IE in our QC process.

Aside from Microsoft browsers we also build for and test in Chrome, Firefox and Safari. These browsers together claim more than 70% global market share and differ in the fact that they are not released as versions with operating systems as such but rather browser updates are automatically ‘pushed out’ to you each time you close/open your browser (dependant on your browser settings).

It’s important to point out that every browser and every version of that browser is idiosyncratic. Our web developers are skilled at identifying those idiosyncrasies and tweaking websites accordingly. This ensures that your website displays consistently, regardless of browser.

Here is a little bit of background about each of the major browsers:

Firefox
Developed by the Mozilla community and released in 2002. Mozilla was originally owned by the aforementioned Netscape, which lost the browser war to IE in the mid 90’s. Firefox has continued to maintain market share and runs on Windows, OS X (Apple), Android and Firefox OS (mobile).

Safari
Developed by Apple and first released in 2003. It is the default device on Apple Devices. A Windows version was available from 2007 – 2012 but was discontinued.

Here is the list of browsers (and versions of IE) that we currently build for and test in and the common operating system that supports them:

And here are some statistics that support our decision around which browsers to test in: 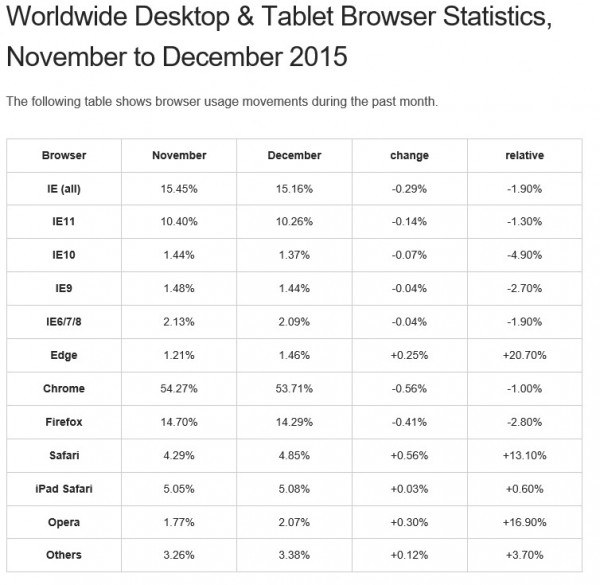 In 2015 we decided to end our support for Internet Explorer 8 even though Windows XP which currently uses IE8 as its default browser still holds a relatively large global market share. Here’s a few reasons why:

Sensibly the Pareto principle came in to play. We'd rather be spending our time on our forward looking/future proofing approach to web development rather than developing hacks for really old technology. Plus, now that Microsoft have given XP the 'end of life' badge, if you or your customers are still on Windows XP we strongly suggest you consider upgrading your software and see how websites should look - you'll wonder why you hadn't done it sooner.

In breaking news, Microsoft have made an ‘end-of-life’ announcement for IE 8, 9 and 10 and stated that these browsers received their last security updates on 12th January 2016. The browsers will still continue to work but without regular security updates they will become vulnerable and will likely be exploited by those launching web-based attacks. Microsoft is recommending that customers upgrade to the latest version of Internet Explorer (IE11) in order to experience increased performance, improved security and support for the modern web technologies that power today’s websites and services. More info here: End of Support for Older Versions of Internet Explorer and Microsoft Support Lifecycle FAQs

We will continue to build for and test websites in IE9 and 10 for the time being. It will take some time for pre Windows 10 users to upgrade to the latest IE browser so we’ll keep an eye on market share statistics and make a call on our continued support at a later date. Note: Windows 10 users are unaffected by this announcement as the default browser for this system is Microsoft Edge which is a completely new browser and quite separate from the Internet Explorer browsers. Plus IE 11 will still be supported on the Windows 10 OS.

This post will hopefully give you some insight into the robust nature of our build and QC process and the lengths we go to to ensure your website displays consistently across all of the major browsers. I mentioned above that our approach differentiates us from other web development companies; some of our competitors will only build for and test websites in the most current versions of web browsers and some will even display a notification on your website to say something along the lines of “Website best viewed in Chrome or IE11 or above”. We don’t cut corners like that because you can never be sure (particularly in this multi device world) which browsers or operating systems your customers use. We make sure we cover all bases so that your website looks great for everyone.

Next month I’ll be talking about the range of devices we build for and test websites in – from desktop to tablet to mobile. Stay tuned.

Disclaimer: Browser stats are notoriously difficult to obtain due to the way that different sources interpret the data and calculate the stats plus the popularity of browsers differs quite significantly by country. There are also biases when it comes to desktop vs. mobile data. I’ve offered my best efforts to give global statistics based on research from sitepont.com, gs.statcounter.com, netmarketshare.com and w3counter.com and this information is offered as a general insight into why we at Apex build for and test our websites in particular browsers. For further indepth information about how Browser Market share is calculated you might like to read these posts: How Browser Market Share is Calculated and NetMarketShare vs. StatCounter - Whose Online Measurements Can YouTrust?